The 98th edition of the major meeting place for cars and two-wheelers in Belgium is once again being held on the art-deco site of the Palais du Heysel.

If Paris, Geneva or Frankfurt are better known to the general international public, the Brussels Motor Show, which takes place from 10 to 19 January 2020, is one of the major events of the European automotive industry. More than 500,000 visitors are expected on 98,000 m2 and, with at least 15 world premieres, 10 European premieres and 107 Belgian premieres, this edition of the Brussels Motor Show promises to be a record edition in terms of exclusivity.

The main attraction on the Subaru stand (Hall 4, Stand 5) will undoubtedly be the new hybrid models, the Subaru XV e-BOXER as well as the Subaru Forester e-BOXER hybrid, which obtained the maximum 5-star rating in Euro NCAP tests, with the highest score in its category for child safety.

In addition to these new models and the new passive and active safety systems (Driver Facial Recognition System DMS, Automatic Emergency Reverse Braking System RAB and Rear Seat Occupancy Recall System RSR), the star-studded brand will present at Hall 4 of the Brussels Motor Show the other models in the range, such as the Outback, Levorg, Impreza and Subaru BRZ.

During the entire show period, come and meet us and discover our exceptional special show conditions! Our showroom is open non-stop until January 25th included (Open on Sundays and Mondays 12-13 and 19-20 January from 10am to 5pm). 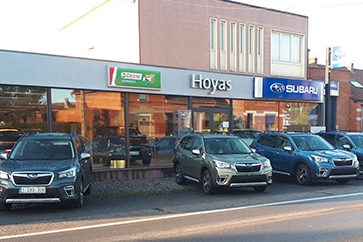 It is with pleasure that we will be able to welcome you again from this Monday, May 11th (exceptionally we will be open on Monday, May 11th and 18th). You can contact us to make an appointment by email or by phone on Saturday, May 9th from 9am to 1pm.

According to government guidelines, we will be able to welcome you again starting May 11th. As this date is still subject to change, we will take into account the appointments requested by e-mail from May 6th, we will also be reachable by phone on May 6th from 9am to 4pm.

See all our news

Interested in discovering in real time our news or promotions?
Register!

Cookies are small text files stored on your computer. Some cookies are in place so that the website works properly, for this reason we may have already put some cookies on your machine. They also allow us to give you the best possible browsing experience and help us understand how you use our site.

By continuing your visit to this site, you accept the use of cookies to analyze the traffic of our site.